After somewhat of a creative hiatus in December and January, I used my 2-week vacation in February to get back on track and back into writing on a more regular basis.

I hadn’t even realized before how much I needed this downtime away from a busy life and every-day obligations. It really helps to be someplace else to get your head free.

A big part of that was definitely planning through most of my blogging year. As always, with some room for new things. While I don’t always keep to my schedules, it is nice to have something to come back to. It allows me to get right on a topic without having to decide which one to do next.

Planning my posts is more to me than just that, though. It is also kind of planning what creative things I’d like to be doing this year. It feels good to have a plan here sometimes. Even if, again, I know I’m not going to stick with it half the time as new ideas come up.

Aside from that, I did a lot of writing during my vacation. Planning, reflecting, taking notes … Even some fiction writing, which I haven’t had the heart to do in a long time.

Even though I know I have too little time for it, actually, I’m seriously considering to start with the Open University writing workbook again that I started really working through a few years back. I was quite enthusiastic for a while and spent several weeks filling numerous pages with notes and little stories prompted by the exercises. But back then I was still studying and could take the time. Maybe it’s a sorry excuse, but somehow life always seems to get in the way of my writing.

Nevertheless, if you’re looking for something to get you writing, I can highly recommend this book. It’s called “Creative Writing: A Workbook With Readings” by Linda Anderson and Derek Neale. There are short lessons followed by prompts and exercises that I found highly motivating and inspiring.

It wasn’t so easy to get back into writing after this long absence, but the effort seems to have been worth it. I felt so much more creative again in March and did pretty well with my schedule—even though I still had even more things coming up.

I haven’t been much into Easter baking before (as my meager assortment of supplies for this purpose revealed), but I think I’ve acquired a taste for it now and will make it a regular thing.

I was pretty happy with my Grass Frosting Cupcakes. Especially with how easy it felt to make them, given that I hadn’t used my piping nozzle starter set that much before.

And I made another currant bread plaid, which I had made last year around this time as well. I really like this recipe that I found on YouTube.

Since my DIY Calendar is coming to an end in mid-July, I already started making new calendar pages for a new one. Now I’ll just have to print, cut, sort, and bind them. 🙂

I made some minor changes in the weekly planner pages to better suit my usage.

This was the old layout:

And here is the new one: 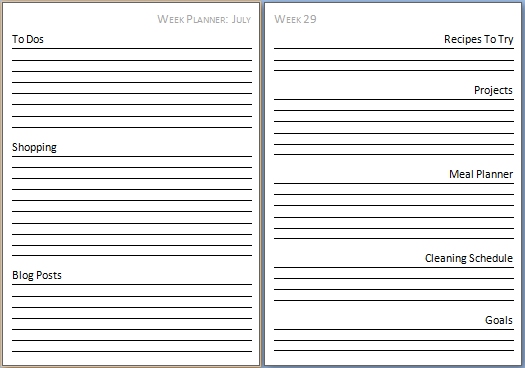 The”To Do’s” and “Shopping” got more space since, during busy weeks, I never seemed to have enough room here.

The “Goals” merged with “Habits to Install.” I don’t know what I was thinking when I made those two categories, but I now think they are more or less the same, and I’m not entering much in either anyway. I found it best to work on few habits or goals at a time. If it gets too many I won’t do it anyway.

The rest worked out pretty well so I left it as it was.

The calendar wasn’t all I did as an organization system update. Toward the end of March I discovered bullet journalling, which seems to have become a trend.

I won’t say much about it yet because I just started, but it will for sure get its own post in the forseeable future.

One thing I will aready say, though: I did not take up bullet journalling to replace any of my existing organization systems, which I think work really well so far. It is meant to fill the gap of daily planning, which I’m currently missing sometimes.

I’m really excited to see how it will work for me. When I first saw it a couple of days ago, it felt like this was exatly the thing I had been looking for without knowing it.

I finally found a neat way to store my hair decoration. I originally wanted to describe it here, but when I started writing about it and kept on and on, I realized there was an own post in this as well. So stay tuned … 😉

Tell me what you think ... Cancel reply

A blog about the love for creativity and the daily struggle to integrate it into a busy life, mostly craft, recipes, education, and writing…